skip to main | skip to sidebar

Knitting is decidedly slow so let's look at the cats:

We are putting in a pool so let's have a look at before and after the big giant pit:

The before shot is after they removed all of the decking and the steps from the back of the house as well as all of the trees. That took about two days.  The pile of sand is for remediation of the water line erosion.  But that's another project.

Putting in a pool is a surprisingly slow process and requires that the contractor not work too quickly or too frequently.  Less than two days a week judging from the pace of it.  I am sure the snail-like pace is for our own good.  However, in light of the fast approaching oil, I want the pool done so we can at least go swimming when we go to our beach house. And in case anyone is interested - and we all should because it's a national tragedy - the NY Times has excellent coverage of the oil spill. It seems like they have an insider involved in the BP's inept efforts to stop the spill.  They scooped CNN and the Times Picayune on the fact that the top kill effort failed by at least 4 hours.

I am blocking the pin wheel blanket for step-grandkid #3 but it's not done yet.  Here is Reggie sneaking a quick nap on it while I was not looking:

I am getting sick of shoes. I used to love them and now I despise them. I absolutely must wear a size eleven. It's not a choice, it's a necessity. I am willing to spend a fistful of money in any store that regularly carries nice stylish shoes in my size. I want to walk in, try them on and walk out with a pair or two. No, I don't want to order them. Sheesh. I have some painful problems with my feet and I wear two different sizes so the try-on step is a must.

Speaking of things that make me sick and  are two different sizes - here is my shrug disaster. The pity is I don't quite know what went wrong. I carefully did the math for my wildly off-gauge gauge, charted the new rows and stitches and started knitting. For the first time ever, I am off in the length of the right compared to the left. That is an a-typical mistake for me. I make A LOT of mistakes, just not usually that one. I carefully counted rows and decreases and increases and still this: 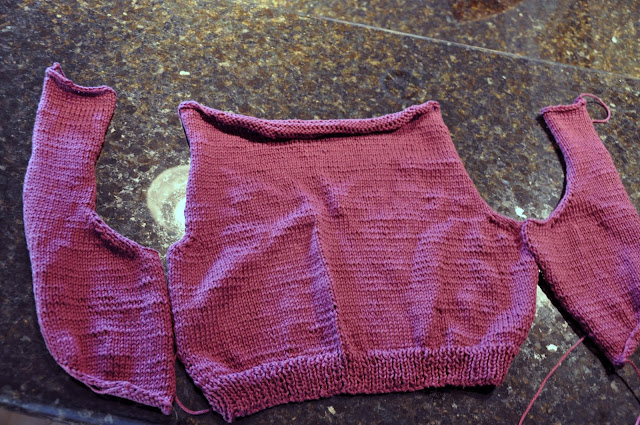 I wasn't really thrilled with the gauge anyway so I may frog and start all over with a smaller needle. Now I have to run out to the store and buy a shrug to wear at the Derby because my arms are too fat to fly solo. Sheesh.
Posted by Seymore Monkey 1 comments

This is a Flickr badge showing items in a set called Knitting. Make your own badge here.

blogs of the moment

What am I doing here?

Seymore Monkey
New Orleans, Louisiana
Boring thoughts from a boring person obsessed with knitting, cats, birds, bars you can get to by boat, and very good food and wine. Clearly, no one will ever read this.